Move from a manual budget creation process to a comprehensive software solution that manages the entire budget cycle in one place, while improving the way they collect and communicate capital requests.

Like many other cities, Alabaster, Alabama previously had a very manual process for collecting capital requests and creating their annual budget in spreadsheets. Because these were collected from multiple sources, they had to first be consolidated at the department level before Finance Director, John Haggard, reconciled them into a master budget document.

The city also struggled to manage capital budget requests. The final approval process boiled down to hard numbers, but some department heads had the foresight to ‘state their case’ where others didn’t know they could do more than submit their numbers on the spreadsheet supplied by the finance department. They wanted a solution that would give every department the fair opportunity to justify their requests in order to level the playing field.

Because the city already had so many disparate systems to accomplish one-off tasks, the finance department was keen on finding a one-stop-shop solution that could manage the entire budget cycle, from start to finish.

The city of Alabaster initially started with ClearGov’s Operational Budgeting and Digital Budget Book. They were already winners of the prestigious GFOA Budget Award, but wanted an easier way to create an award-winning budget book while providing citizens with an engaging, interactive budget website that they would actually use — versus a cumbersome (albeit, award winning!) static PDF document.

In a normal budget cycle, the city starts with capital planning, followed by operational and personnel budgeting. After using the Capital Request module for the first phase of the budget process, department heads were sold on the software after seeing its capabilities and how the project pages tied into Digital Budget Book.

The city’s library director, Kim Roberts, had wanted to renovate the bathroom for years with little traction for approval, was excited to use the new software. She took full advantage of ClearGov’s capital request module and included pictures of the current condition of the bathrooms, renderings of what they could look like after renovations, and detailed cost information in the supporting documentation section of their request. Because of this, the project that was overlooked in previous years finally caught the eyes of council members when the request could be viewed – both visually and by the numbers – in one central ClearGov dashboard location.

Haggard said that so far, ClearGov has saved the city a “ton of time.” Eliminating meetings and phone calls as they go through the capital planning process. Because department heads have always had their own system for tracking requests and communicating with employees on the budget, they appreciate that ClearGov gives them the option to assign collaborators to ‘run with it’ or continue to have team meetings where they look at the data in ClearGov and hash out the department’s requests together.

Matt Benati is Vice President of Marketing for ClearGov®, the leading provider of Budget Cycle Management software for local governments. Matt is passionate about helping organizations modernize their annual budgeting process by automating workflow, increasing collaboration, and improving transparency between governments and citizens. 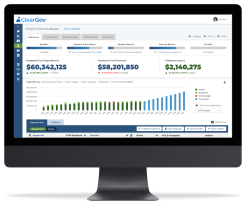 See why ClearGov is the clear choice for Alabaster, AL